This Is Vital to Public Health: Petition to Remove Repacholi - a reminder
//omega.twoday.net/stories/1515185/

Repacholi was asked by Next up about the money he receives
//www.livelogcity.com/users/omega/17939.html

Conflict of Interest and Bias in Health Advisory Committees: A case study of the WHO’s EMF Task Group
//omega.twoday.net/stories/2178233/

WHO writes off electrosmog victims
//omega.twoday.net/stories/1142664/

The cozy relationship between the WHO and the electric utility industry //omega.twoday.net/stories/1023935/

WHO and Electric Utilities: A Partnership on EMFs
//omega.twoday.net/stories/1176061/ 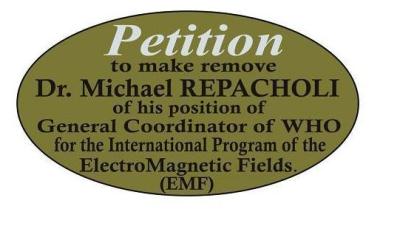 WHO's Repacholi Has Done It Again

If for a short moment, you actually thought that Mike Repacholi had done the right thing and was promoting a precautionary policy to protect children from mobile phone radiation health risks, you had better read our latest commentary,
//www.microwavenews.com/fromthefield.html#Repflip

Those of you who know Mike and the way he works will not be surprised. We only wonder what will it take for people to get fed up and send him home to Australia!

Maybe this time, after reading the latest MWN commentary, people will take this more seriously?


Iris Atzmon in Israel makes an interesting proposal below that should be taken seriously. As an example of the sort of action that could be taken for instance, the Union of Concerned Scientists has been circulating a petition for scientists to sign that calls for restoring scientific integrity in policymaking in the US as a result of the Bush administration's interference in regulatory science. A similar petition to the WHO could be circulated internationally - calling for the removal of Repacholi, who is to good science as Michael Jackson is to childcare.

I think "The WHO EMF Charade Continues" can be a good basis for a petition of "show us the money, Mike" by scientists and citizens. It should be the interest of the WHO eventually to remove this guy from his job (if they have some honest people left there) because Repacholi is causing a very big problem of public image to the WHO. The more of this info is circulating widely, the more people can neutralize any statement used by the governments and industry (especially industry) that uses the WHO as legitimation for their acts (or better- lack of acts). This knowledge gives power to the people. When people know how corrupted the WHO is, they can take this info to courts and use it there as well to neutralize the industry. The damage that Repacholi does to the image of the WHO can help breaking the status quo. What science doesn't do (because it is ignored and manipulated), Repacholi's corruption can do. If used right and taken by the media, it can take the fight to a new direction.

From: Olle Johansson
Re: Petition to remove Repacholi

A very interesting idea - when will it get officially launched?

Please, have a look at:

There are quick results to Repacholi's action, I thank him in the name of the Israeli industry:

Today spreading on two pages is a weekend article in the most distributed newspaper, it is an article about radiation levels from phones, (of course the numbers look very small because they keep push SAR values and not say anything about the uW/cm2 units.)

The companies reaction in a frame near the article, refers the public to Repacholi's clarification. The journalist writes: "in the cellular forum they refered us to a clarification notice that was published by the WHO, after the latest reports in the media about the need for precautionary principle with regard to exposure of kids to the radiation. The clarification is at:
//www.who.int/peh-emf/meetings/ottawa_june05/en/index4.html

The companies say more: "The american FDA and the european WHO recommended the SAR level that is safe to use with cellular phones. So, every phone whose SAR is in the frame of this recommendation, is safe to use by the public, and it doesn't matter if it's kid adult or old people. The SAR level represents maximum level in laboratory conditions while in reality because of the network, the phones emit tens of procents less from the standard values.

Examples for answers by Repacholi to the pubilc: in the second example the word science and its derivatives are used 8 times. If someone is really scientific, why would he need to use the word science so obsessively? This is a brainwash. The word money is not used even once, although the money was the point of the message that was sent to him originally. All he was asked was to show the source of money- he is in public organization and he owns this info to the public ! An idea is to use the freedom of information act and get the info through the court for showing why he needs to go home, to Telstra.

Robert WHO bases its decision on the science ...if the science does not support your position this is not my problem. It is a cheap shot to say that because the WHO position is the same an an industry position that we are in bed with industry...this is patently untrue and it does you no good to even suggest it..

Our Director General claimed to be hypersensitive...this does not mean that we should base our decisions on anything but the valideated evidence..

Pity is that people such as yourself wont listen to the science ...it is one of our greatest resources...all successful countries reply on it. From: Repacholi, Michael Harry To: Hans Karow Cc: mwn@pobox.com ; Leeka Kheifets Sent: Thursday, July 07, 2005 2:09 AM Subject: RE: MWN Commentary July 5 2005 your position please

Thank you for sending on the commentary from Louis Slesin. Unfortunately Louis has always been a critic of what WHO is trying to achieve…. and that is to assess the science in a scientific and unbiased way using criteria that WHO has applied for almost 60 years. As you know WHO has built the highest possible reputation in public health matters among the public and governments world wide and the EMF Project will not be deviating from the sound science course that sustains this high esteem, no matter what the pressures from self interest groups or individuals. Louis appeals to people who do not believe in the scientific method for resolving issues. He, like others who are unable to argue a scientific case always claim WHO decisions are industry biased…a completely untrue position. Our Legal Department has clear rules for funding and inputs to the health risk assessment process. WHO scientists working on the EMF Project are and will continue to be unswayed by any special interest group as long as I have input to the process.

With respect to the WHO message on the use of precaution, our message is clear. As outlined in our Fact Sheet on mobile phones (see: //www.who.int/mediacentre/factsheets/fs193/en/ ) it states: If individuals are concerned, they might choose to limit their own or their children's' RF exposure by limiting the length of calls, or using "hands-free" devices to keep mobile phones away from the head and body. [transfering of respnsibility on the individual] WHO is promoting precaution and particularly the reduction of exposure through its Policy Framework. The Ottawa meeting has been formatted to deliberately challenge all aspects of the Framework. Whatever the outcome of the Ottawa meeting, WHO will continue to promote precaution in public health policy where there is uncertainty in the science. Louis tends to have a short-term memory when criticizing WHO policy.

With respect to your own situation, WHO held a workshop in Prague late last year. For more information see:
//www.who.int/peh-emf/meetings/hypersensitivity_prague2004/en/index.html I have met many people with your condition and I do sympathise hugely with your plight because I know how much it affects people and that the symptoms suffered are real

[but at the same time:
//www.who.int/peh-emf/meetings/hypersens_wgrep_oct04.pdf

However, the conclusion of the WHO workshop, and a recent solid review of the science, was that there is no evidence to suggest your condition is caused by exposure to EMF. Given the lack of evidence to show a causal relationship between your symptoms and EMF, it is important to communicate this message instead of continuing the myth that low-level EMF is causing various symptoms that may be due to other causes. WHO will be coming out with more information on this very soon.

If I can provide any further information please do not hesitate to contact me.

"We only wonder what will it take for people to get fed up and send him home to Australia!" (Microwave News 4.8.05)

We have written a lot about the WHO EMF project recently and we were in the process of preparing our next posting on a different topic (check in later this week), when we came across a new paper on the sensitivity of children to EMFs by Leeka Kheifets, Mike Repacholi and other members of the EMF project. It appears in the August issue of Pediatrics. We could not let it pass without comment.

This paper reveals the WHO project¹s true commitment health, nor to children, nor to precaution, but to industry the project and its meetings. In this case, it¹s the Electric Power Research Institute. In the same way that Repacholi found a way to accept contributions from the wireless industry, it also gets support from the electric utility industry. And Leeka Kheifets and Mike Repacholi deliver.

The mealymouthed recommendations at the end of the paper are a travesty.

and then decide for yourself whether these people should be running a public health program.

We are all doing our best.

Signing the petition to remove Raphcholi, and getting all the family and friends to sign as well.

A lot of people still do not know of the petition, but the word is spreading.

We will succeed (in the end.)

Governments and telecom operators worldwide constantly quote the WHO and Repacholi. The damage they have done is incalculable. Given that the initiative of a petition to have him removed would help to destroy the credibility of their arguments. It's a global petition, Please let's ALL sign up to this.

What I can’t get over is: Why are the victims of insensitive mast siting so scared of getting into the open?

Is it because we get intimidated and humored by the mobile industry and by anyone who thinks they cant get by without their mobile phone.

And by anyone who has not got a mast near to where they live and “Believe in that the Government knows best because of the research that has been done”. Yeah, by who?

The Government? The NRPB? The INCPR? The WHO?

The thing is we all get the intimidation and humoring, both from the companies, the council, the government and who ever. But, and that is the important thing, they can only do that for a short while, because we get over it real quick and start biting back, because we do not accept being bullied in the long run.

So, if removing Rapacholi is the real start, Pls. all, get on with it.

The petition is signed by people who KNOW Repacholi by (non)-communication. How do you expect the demonstrating people in China and the demonstrating mothers + children in Mexico and the awakening people in many countries to sign a petition against Ravioli (who is Ravioli anyway ?????). A worldwide network of hundreds of people against Repacholi is not small, nowadays. The people who sign the petition are not just people, they have experience and knowledge. 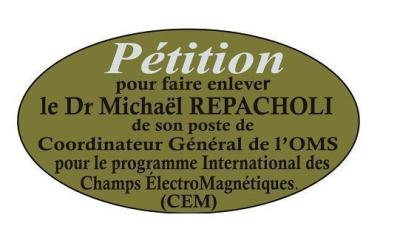